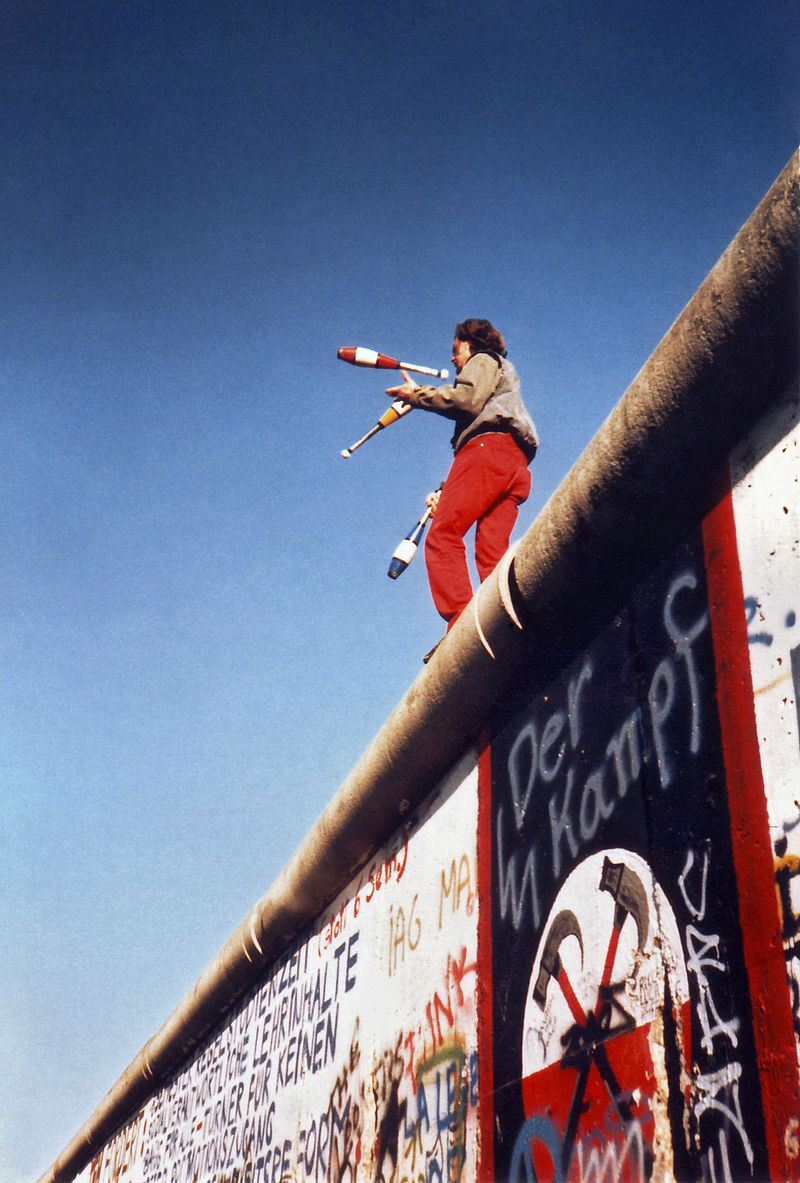 I’ve been to Berlin several times, but I do not know the city. It’s big, and it keeps changing.

The first time I went was when I was about 12. My Girl Scout troop took a field trip to Berlin (my family lived in Frankfurt because my father was in the US Army) to see the Wall and Checkpoint Charlie.

The second time I went was in 1988 with my husband. Change was in the air, and we danced in a club on the grounds of the old UFA Fabrik (United Film Artists Factory) among a crowd of people who danced, not with one another, but alone, isolated from one another —much as West Berlin was still isolated from the East German territory that surrounded it.

Two years later, we went again. The Wall had come down just a little over six months earlier, and we were curious about the remnants of life behind what had once been called the Iron Curtain. We saw the effects of air pollution and witnessed the failures of collectivism in the bad food. Instead of the wonderful breakfasts of dark bread, cheese, and tart jams we enjoyed on the western side of the Wall, we ate scrambled eggs that tasted like they had once been powdered; canned fruit; instant coffee; and dry, tasteless toast in a cafe that I remember as being the size of a football field.

I have been to Berlin since then, and it is still changing, but despite my interest in the city, I had never read The Berlin Stories, Christopher Isherwood’s collection of stories and diary entries based on his experiences in Berlin between 1929 and 1933, the years of Hitler’s rise. High time, I decided, and picked it up.

This was the book that created the character Sally Bowles, the central figure in the musical and movie Cabaret. The collection begins with the narrator Bradshaw encountering a Mr. Norris on a train. Bradshaw befriends Arthur Norris, who turns out to be a smuggler, a spy, and a masochist who pays a woman named Anni to whip him and generally cause him pain. In addition to Norris and Bowles, we meet Frau Schroeder, the landlady, and the Landauers, a wealthy Jewish family who own a department store chain.

Isherwood does not write about death camps or bombings. The stories at the beginning of the book are often laugh-out-loud funny. As it is now, Berlin in the early 1930s was a place where people of all sexual orientations and tastes could indulge themselves. The country was in upheaval, and people didn’t know whether the Communists or the Nazis would come to dominate the country. The majority opposed the Nazis, who were viewed as fools and buffoons. People laughed at them at first, but the Nazis stopped being funny when they did things like beat and kick an elderly Jewish man while ordinary people looked on in horror. Afterwards, bystanders helped the man get to a hospital, but no one felt they could do anything to stop the beating.

At the end of the book, Isherwood writes of his preparations to leave Berlin. People who voted Communist only a few months earlier now speak reverently of “Der Fűhrer.” He does not blame them. They are, in his words, acclimating themselves—“after all, whatever government is in power, they are doomed to live in this town.”

That’s the thing we need to guard against, and that’s why it’s worth undertaking efforts such as the recent “Ides of March” postcard campaign, though some have dismissed that campaign as “flaky.” “Does anyone really believe the king of mean tweets will be fazed by snarky postcards sent by voters who despised him from the start?” Joan Vennochi asks, writing in the Boston Globe.

Well, no, anymore than millions of people marching in protest would cause him to step down. But that’s not the only point of these campaigns. Whether we write postcards, rally in public spaces, or meet with our neighbors to stand with the ACLU, or deliver meals on wheels, we are flexing our participatory muscles and letting others know we’re with them.

Much of the power of The Berlin Stories comes not from what Isherwood describes in his book but from knowing what happened to Berlin and its people after Isherwood left. Yes, like the residents of Isherwood’s Berlin, we may be doomed to live under this administration (for a time), but every act of protest expresses our refusal to become what Isherwood described as “acclimated” to standing by passively as the thugs do their work.