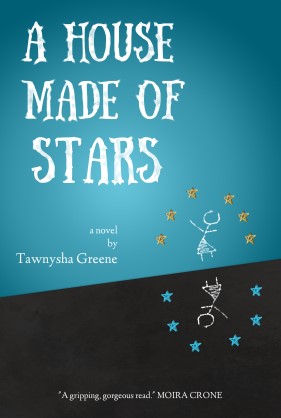 This brief but absorbing book is Tawnysha Greene’s debut novel. It began, according to an interview with Eva Langston on inthegardenofeva.com, as a series of flash pieces written as the final project for a fiction class Greene took while working on her Ph.D. at the University of Tennessee. She kept working on the story, and published flash pieces about these characters in some thirteen different literary journals. Ultimately, however, she found that the story could not be carried by a series of standalone segments, and she rewrote the manuscript a number of times to create the narrative momentum a book-length work required. Her book became the second to be published by Burlesque Press, which sponsors the annual Hands On Literary Festival and Masquerade Ball in New Orleans each year.

The ten-year-old narrator of A House Made of Stars struggles to make sense of the world in the tradition of child narrators of books such as The Bluest Eye, The Tin Drum, or To Kill a Mockingbird. These are stories told by children who see the truth because they have not yet learned to turn away from it, children who help us name and conquer pain and injustice by sharing their determination to triumph through the sheer act of describing the world as they see it. The truth that the unnamed narrator of A House Made of Stars sees is a world of child abuse and domestic violence perpetrated by a mentally ill father and husband. Our narrator is perceptive and insightful, but when the book opens, she accepts her mother’s portrayal of her father’s behavior as part of a game, a game in which her mother hides the narrator and her sister in the bathtub to protect them from their father’s rage.

But the mother cannot protect her daughters, or she is unwilling to do the things that would protect them completely. The metaphorical house of stars first appears in the book when the narrator and her deaf sister are in the back of the family car at a drive-in movie. The girls, who are too bruised from their father’s horrific abuse to be seen in public, look up into the night sky and it is then that the narrator sees the constellation Cepheus, which looks to her like a house lying on its side.

This toppled house is a metaphor for the narrator’s family. We never know specifically what is wrong with the father (all the characters are known only by their familial names—father, mother, sister, cousin, grandmother, father’s sister) except that he is tormented by, and torments his family with, alternating episodes of uncontrolled rage and delirious mania (as when he sells the family van and takes his wife and daughter to Disneyland though they have no money for food).

The combination of poverty, a third pregnancy, and fear eventually drives the mother to take her daughters to the one place in the world where they can be truly safe and cared for—her own mother’s house. Life at Grandma’s is not easy (the mother and two daughters clean houses for various neighbors) but it is safe and loving. Grandma works as a clown at children’s birthday parties, and the family has food. Grandma shows the girls a book about the constellations, and it is then that the narrator learns that the constellation Cepheus does not represent a tilted house, but a king who chained his daughter Andromeda to a rock in the sea to be devoured by a monster until Perseus rescued her.

“Did they get away?” the narrator asks, and when her grandmother nods and points to Perseus and Andromeda in the sky, we sense that the narrator has begun to understand that she must escape to survive.

Greene’s decision to write about child abuse from the perspective of a child is courageous. The scenes of abuse are hard to read; I wanted to skim over them or even skip them, but unlike some books that sag in the middle or begin to flag at the end, A House Made of Stars picks up speed as the narrator’s ability to articulate her situation increases and her determination to survive grows. I began to root for her rather than pity her, and my curiosity about whether or how she was going to escape kept me reading until she undertakes her final courageous act. Greene has done a good job of laying the narrative groundwork for this series of dramatic events as well as the metaphorical construction that allows the narrator to imagine herself holding up the walls of a new house of stars, one without a king or a father, as the book comes to a satisfying and inspiring conclusion.