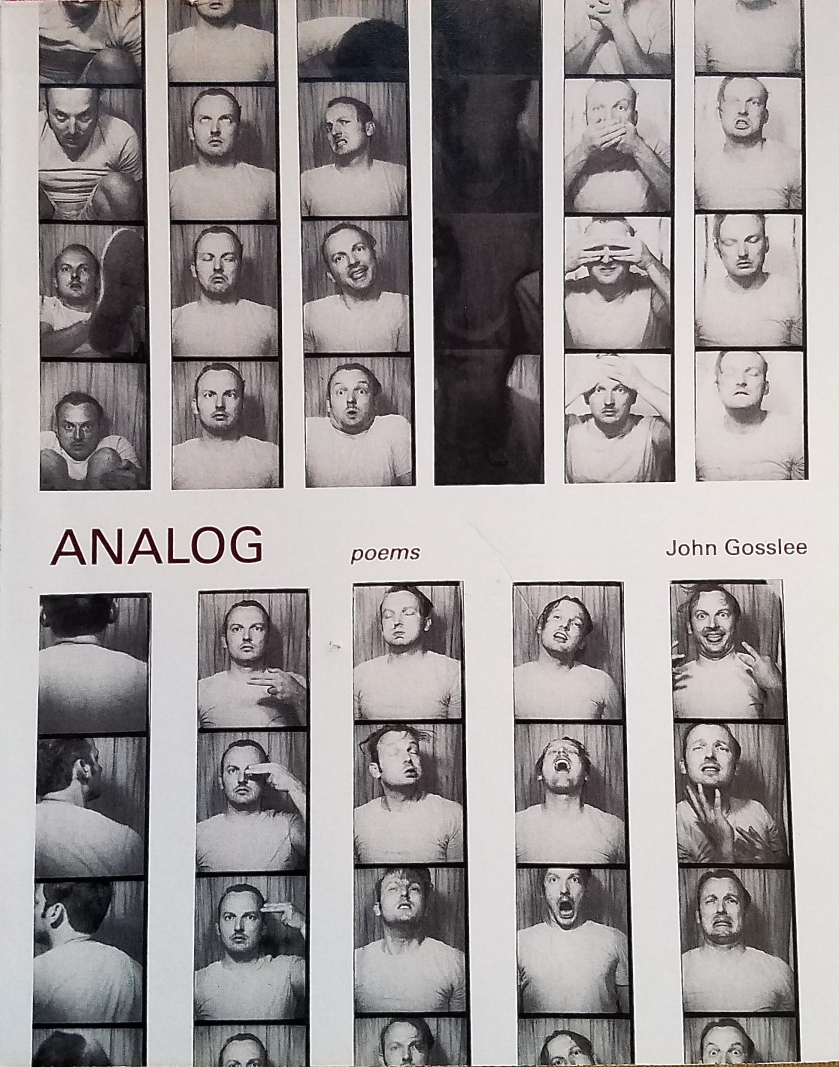 John Gosslee recently published two new volumes of poetry. Out of Context features blackout poetry, and makes an apt counterpoint to his verse in Analog.

As a title, Analog means continual (vs. digital, segmented), so the cover art is smart. The photobooth self-portrait photo-strips embrace the idea of analog.  The subject might step into the booth with a plan to stage moments, but click-click-click-click that camera eye only opens four times.  Gosslee’s poetry is concerned with the moments before and between what’s documented: the continuum of intent.

There are two poems in Analog that connect really well to Out of Context.  The first is “My Body Is a System of Enlightenment,” which begins:

.What if the gods of whatever
come to my house and test me,
but look like a blue jay dive-bombing robins
as they feed in the yard?

It’s an interesting opening thought. Every day, moral systems assail, judge, or “test” ignorant subjects, and there is no common lingua franca.  In Analog, the speaker’s position seems to be that there is no possible way to detect judgment, until one encounters resistance.

.
I lope down the mountainside,
But my wings won’t open.

My feet are covered in scar tissue,
the toes are fused, where have I run?

Angels put their hands on my shoulders
and hold me in place.

The hatchet laid against the sapling
fuses into the trunk over time.

What’s going on with sound here is musical and lovely. The internal long Os create rhythms in the text.  One might decode a message that bodies are short-term vessels, as recyclable as bottles that return to earth and water, as mundane as any tools repurposed by nature, which “fuses” matter.  There also is an underlying belief; some new epiphany, some new clarifying philosophy, has yet to be revealed.

I find myself wondering: How can the speaker realize zher feet have been held to some fire (standing in hell? walking on coals? scrutinized by critics?) yet not have registered they were burning? Easy, if the parties do not share the same belief system; easy, if the parties are not speaking the same language.

The cat comes across the table
because it wants the birds.
My hand on its head, its purr
like a little earthquake ready to swallow the world.

Gosslee’s opening salvo seems to encourage his reader to think of problems in new ways, because there might be more than one species involved.  The ultimate arbiter might not be one of two birds, or one of two humans. It might be some cat, some thing, neither party expected.

And that notion, that the best laid plans gang aft agley, leads to the poem “The Beach Is a Ringing Bell,” which comments on blackout poetry.

I black out words in a book
to make it say what I want to read,
a meditation of purposed loss.
.
The abandoned city’s shop signs
glow in the sun-swept streets,
boats laid on the long concrete docks wait
like words that outlived their speakers.

So texts, through the lens of an erasure poet, become a beach, a place where a beachcomber might hunt for sea glass, for shells, for evidence, and the figurative collector, the erasure poet, scans for words, phrases, language. The host poem then becomes an “abandoned city” and the light of the collector’s intellect searches “sun-swept” avenues of language. Select words become racing shells, orphaned, docked, and ready to move into open water again, “like a bottle forever passing between rough hands.”

The collection deserves repeated readings. Each poem has its signature thought, its key, and this is a very satisfying read for this writer of flash fiction and prose poetry.

Gosslee’s other recent collection, Out of Context, features blackout poetry. The blackout volume is a study in instinct, and Gosslee’s seven stated goals include “reading each poem one time, then enacting the blackout in a single motion without returning to fix any mistakes.”  It opens with an episodic essay that provides a nice history of redaction as an art form.  He openly acknowledges those who paved the way for redaction “as a form of interaction” with existing non-poetic texts, including Austin Kleion, Srikanth Reddy, and the CIA. There is no disputing, “redaction is always a collaborative project, or perhaps a parasitic one.”  He also makes it clear, as is visually evident in the work, that he views his redactions as art forms.

Gosslee’s redaction markings vary in style, from fat walls of Marksalot jumbo chisel tip to loose, lithe scrawl.  Sometimes the blackout happens with a heavy hand and full coverage, and other times not.

Marksmanship: A variety of marks are made on the source poems. A lighter, script-like marking (L) “Insomnia,” and a heavier full redaction mark, as with “The Memory Palace.”

In a recent email interview with Change Seven Magazine, Gosslee said, “I got tired of doing the hard black lines and wanted to try a number of things, including up and down marks as well as almost Arabic script-like mark making. The overlay of my marks is called mark making in art. The marks progress from a static form that sits on the page obscuring text to one colorful hand with wrist work that highlights the text.”

Each of the pieces is signed as an artist might in the lower right corner, and all pass the squint test for graphic arts. That means if the viewer squints eyes while looking at it, pleasing patterns of text, void, and blackout reveal themselves.  Figure and ground (redaction and source) are clearly discerned, and curving and linear patterns become evident.

One poem in particular seems to have a dreaded editorial deletion slash in it, the connotation to some, perhaps, being “remove these words; I hate them.”  Or, it might mean the redactor did not have the heart to redact, but instead passes this poem forward with blessings. That’s “Blackout 255,” derived from Brewer. It is very different from the rest. My suppositions were wrong.

Gosslee said, “I did this poem as a kind of joke, to illustrate the minimal amount of changes that an artist needs to make to a preexisting work to illustrate that it has become its own. This is a commentary on lazy art.”

There is nothing lazy about the mark-making and poetry in these two collections.  For readers interested in blackout poetry, Out of Context is an oversized, handsome volume with the opening essays adding interest.  Analog is a smart, playful collection.  This be the verse of a curious thinker and iconoclast.

A.E. Weisgerber is Assistant Fiction Editor at Pithead Chapel, and a Reynolds Journalism Fellow at Kent State University. Her recent fiction has/will appear in SmokeLong Quarterly, Structo Magazine, The Collapsar, DIAGRAM, and Gravel. Recent non-fiction in The Alaska Star, Alternating Current, and The Review Review. She’s a current nominee for Best of the Net, Best Small Fictions, and The Pushcart Prize. She keeps information current at http://anneweisgerber.com

READ MORE BY THIS AUTHOR: