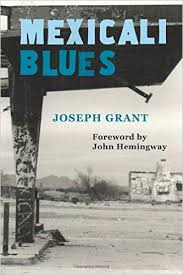 Grant said in a recent E-mail exchange that he always appreciated Hemingway’s style. “I began to research his life and discovered that it was as interesting as his stories and novels.”

Through Grant’s involvement with The Hemingway Project, he became friends with Hemingway’s grandson John, who wrote the foreword to Mexicali Blues. Grant said, “He is a good friend who writes well, first, and is a Hemingway, second.”

Along with their Papa mojo, Grant’s stories take some cool left turns into the Los Angeles noir genre. Although Grant is originally from the East Coast, he has lived in Los Angeles for nearly twenty years.

“There’s a definite connection,” Grant says of his work, “to Chandler and Cain. LA is a great noir town and there are still enough alleyways, dead-end streets (literally and metaphorically) as well as corruption to go around that would be very familiar in a classic Chandler novel. The cast of characters just changed, that’s all.”

Grant added that the adoption of new Mexicali cultures into the noir landscape is natural. “I’m deeply steeped in the Los Angeles-Mexican traditions and way of life,” Grant said. “I write about what interests me, and I also thought the Mexican-American experience wasn’t as widely written about as it should be. I wanted to bring it a larger voice.”

That voice sometimes has the affected, cocksure quality of noir Hemingway (as in his short story “The Killers”) and the over-the-top machismo of Chandler and Cain. In “The Perfect Hit,” for example, the narrator shares, “Paris was his sometimes mistress, but New York had been his wife. He had divorced himself from her and was now living on the West Coast.” Lines like that would be right at home in Chandler’s The Big Sleep.

To that point, gender roles are fairly binary: male protagonists tend to be drivers, hit men, politicians, undertakers, toreadors, and day-laborers. The women are characterized as mistresses or virgins, staked as bets, handed over as bribes, impregnated and murdered, and even prostituted by their own fathers.

But Grant innovates within genre and gender roles. Think of it as noir fiction hitting the West Coast in 1940, idling in a cul-de-sac for a few decades; then Grant hops into the driver’s seat with some Hispanic heroes and villains as passengers for a fresh spin around the block. For instance, meet Javier, in “The Outsider,” who is caught between the Mexican and American worlds. The character muses,

“To the Mexicans, I wasn’t Mexican enough. They thought of me as guerbacho, a white person who would side with management, some gringoes from Texas who didn’t trust me because I was Mexican. I was lost. I was an outsider no matter who I was.”

Grant juxtaposes LA with Mexico City, and the idea seems to be that these two worlds—rich and poor, Caucasian and Hispanic, North American and South American—may have intermingled, but their competing ideologies are brawling, and neither side gives in. That is the Mexican-American border that goes under Grant’s microscope.

He encapsulates the border-jumper’s dilemma in “Across the Border.” In it, a Mex-American is carjacked by a Mexican nationalist; the tables get turned and the American abandons the wounded Mexican for dead, then finds himself in a reversal of fortune, needing to 1) return to the US without any ID in the company of drunk American teenagers who 2) are the catalysts for his own border crossing where he is ironically gunned down by US nationalists.

As the lights grew faint from the slowly emerging shadows, Paul felt truly alone. He looked at his wounds and knew from their locations and the internal damage they had done, that he had only a limited time left and as he lay dying in that deserted field, he thought of the night and of the kid and of the futility of it all.

In this hot mess of a border, Mexican and American stereotypes reach epic proportions. The young Mexican car-jacker is sleazy, proud, dishonest, and angry. The young American tourists are drunk, obnoxious, rude, and arrogant. The Mexican-American protagonist is opportunistic, stingy, and an easy mark. They are equally hateful, racist, and ugly, and this objective distance produces Grant’s political punch.

A beef I have, for a couple stories, is the liberal use of Spanish slang; I had to stop reading to look up some colorful curses. In doing so, I understood this to be a world where Mexican day-laborers call their day bosses white assholes over and over again. Sometimes, those called “pince heuros” (fucking whites,) or worse deserve it. For instance, the guy who hires the day-laborers to cover his murdered wife’s concealed body under a new patio and then stiffs them rather pay their wages. But other times, as in tourists perusing a gift shop, it seems as if Grant is secreting these telling epithets by not making the Spanish-to-English translation more clear. Having an urban dictionary handy was helpful.

Grant said, “There are racists in every culture, violence in suburbia as in low-income neighborhoods. I write life. I write what is real,” but Grant adds that sometimes he helps the truth along with “a hint of spiritual or magical endings.”

Grant’s dip into magic realism sparkles in “Fishing for the Moon,” which is in some ways a retelling of Fitzgerald’s Gatsby, with a pauper performing fabulous feats to win the rich girl, and “Reflections in the Looking Glass” has many qualities of Gabriel Garcia-Marquez with its lush, sensual, ambivalent female protagonist.

In the early morning hours, when the air outside was still cool, and sweetly scented from the errant kumiai that grew in the rain-soaked courtyard, Marta would sit in the chair and dry her hair with a towel. She would observe, bemusedly, every morning as the cats of the neighborhood traipsed along the wet and drying cobblestones to get the milk that Lupe, the kitchen servant, would always leave them.

“I’ve read a lot of Garcia-Marquez,” Grant said. “He was a newspaperman like Hemingway, and I suppose that influence is there as well.”

Anne E. Weisgerber has recent stories published or forthcoming in New South, The Airgonaut, Tahoma Literary Review, Vignette Review, and Jellyfish Review. She is a freelance fiction editor, and has been nominated for Best Small Fictions 2016. When not teaching, she’s working on a novel that spans five generations, or hanging out with the #fishtankwriters. Follow her @AEWeisgerber, or visit anneweisgerber.com.