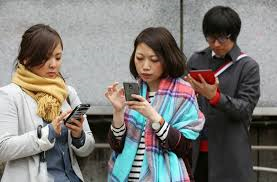 “On or about December 1910 human character changed,” Virginia Woolf once wrote. Relations between ”masters and servants, husbands and wives, parents and children” had irreversibly shifted, ”and when human relations change there is at the same time a change in religion, conduct, politics and literature.”

Or it may have been that poor Ginny heard Lytton Strachey, pointing to a stain on sister Vanessa’s dress, ask pointedly, “Semen?”

Mores and morals change, but our basic instincts haven’t yet. I’d say that on or about January 2007, human character changed (again). This time it was Steve Jobs on the stage rolling out the brand new iPhone.

Look around now; in the past eight years, you have seen most of America subjugated by the smart phone, our heads bowed, our thumbs swiping and texting and twiddling relentlessly, face-down in the gushing fire hydrant of information, impressions, but not really much more knowledge or scarcely any news, other than the revelation that Kim Kardashian has broken the Internet or that her dad Bruce Jenner is becoming a her.

We walk aimlessly down sidewalks, like Twitter zombies, caught up in social media, who’s up, who’s down, who’s getting flamed, who’s getting liked, looking for that next little tidbit of recognition. Who likes my post, who linked to my blog, who sees me?

What hasn’t changed is my ranting. Even I can recognize that old man “get off my lawn, you disrespectful kids” tone when confronted with a swiftly changing technology that seems to change humans themselves.

I suspect old-timers in ancient Greece were complaining much the same way at that new-fangled alphabet that would allow writers to put down their trivia, instead of brainy bards having to memorize Homer’s wonderful saga of gods and men gathered at the gates of a fallen city. Or later monks, who lamented the loss of their illuminated manuscripts to the likes of a grubby Gutenberg and his ilk, melting down metal, setting type, and letting the common men and women actually read.

Here’s what I believe doesn’t change, even in a handsome online journal like Change Seven: the human heart in conflict with itself, trying to find connection, community with those other seven billion hearts beating now on our planet. And somehow, words, written in pixels if not on a page, can point us into that communion. Flaubert famously said, “Madame Bovary c’est moi,” in explanation of how the writer is inspired by character. The reader says the same thing when she picks up that wonderful novel and starts to read. She becomes Emma Bovary. She becomes Mrs. Dalloway. She becomes Ishmael. She becomes a myriad of people, passing through the imagination into other and otherwise unseen lives.

The reader changes, and sometimes even changes her opinion of the world outside, when she stops reading and looks up and reflects anew.

Dale Neal is the author of the novel, Cow Across America, winner of the 2009 Novello Literary Prize, and The Half-Life of Home. His short fiction and essays have appeared in Arts & Letters, Carolina Quarterly, Marlboro Review, Crescent Review, and many other literary journals. He works as a journalist for the Asheville Citizen-Times and lives in Asheville with his wife and dogs.

Dale’s work appears in our debut issue. Read it here.