One hundred years ago, the United States entered the First World War.

That same year, a sunburnt country boy from the cotton fields of eastern Arkansas and two of his companions put on their finest duds to stand before a camera in a photographer’s parlor.

Most likely, they pooled their money together to splurge on this photo that would be printed on a postcard to send to their families.

At least one of the boys was bound for the killing fields of France despite his daddy’s protest, a man whose own father was killed in the Civil War two days before he was born.

The young man sitting for the photograph has his head slightly cocked. Even by the stodgy standards of the day, the young man’s Victorian era hand-me-down suit of clothes had already fallen out of fashion. 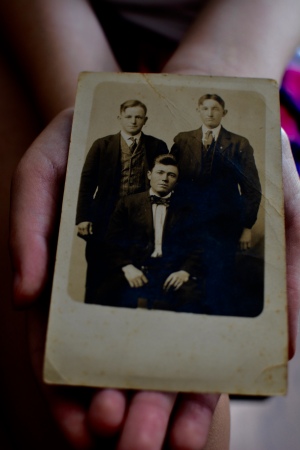 This young man, with a square jaw and rugged good looks, was Charlie Vincent, my grandfather. This is the only picture of him before he went off to war.

Pictures like this of my war-bound grandfather tell a story. And we humans love to tell stories. In my granddady’s time, photography was based on fragile glass-plate negatives. Today we have smartphones, affordable digital cameras, and drones. We are flooding Instagram, Flickr, Facebook, and other social media with our stories.

We have a handful of pictures of Charlie because one of his younger sisters and my great aunt, Texas Tennessee, sent them to me the summer I was fifteen. She said she wanted to pass the pictures onto the someone in the family who cared about history.

My great aunt “Tex” recounted in a handwritten letter that came with the pictures how she and her momma took the train to see Charlie before he shipped off to France. She was only a little girl back then, but she cherished that memory of her big brother.

Photographs help to tell stories that may otherwise get lost.

In France, Charlie was in the Meuse-Argonne offense with the 79th Division’s machine gun battalion. He made it through the last few, bloody months of the war without so much as a scratch despite the heavy fighting. But he was a machine gunner in that war and he never shook off those boys he killed battling through France.

Sometime after the 11 November Armistice, Charlie caught the Spanish flu. The pandemic, by some counts, killed nearly 5% of the world’s population, including a French young woman Charlie was courting. Her name was Marcella. And my mother was named in her memory.

Charlie recovered in an army hospital overseas and was discharged in 1919. While in France, he made friends with a wounded Welsh guardsman, Charles (Charlie) E. Rowland. Welsh Charlie never made it back to Wales. He jumped on a steamer and made his way to the US where he married one of Charlie’s sisters.

In Arkansas, cotton demand for uniforms and military equipment during the war meant that struggling farmers actually had extra money to spend on luxury goods like photographs.

Overjoyed by his safe return, an unnamed member of the family paid a photographer to come out to the family farm in his wagon to mark Charlie’s homecoming.

Here he is in shirtsleeves and barefoot on his first day home from France. You can see how Charlie has changed. The eyes are harder and his face more gaunt. After the war, family would say he was still fun-loving, but he couldn’t handle large crowds anymore.

He’d sometimes sat alone in the barn if there was too much of a ruckus during a family gathering. And Charlie drank sometimes. Sometimes he drank too much.

My mother, Sammie Marcella Vincent, was born in an unadorned farmer’s shack in Poinsett County, Arkansas, on 20 July 1929 to Charlie and his wife Bessie (nee Rutledge).

Marcella was the farming couple’s second child. An older brother, John Franklin, was born sometime in the mid ‘20s, though the exact date of his birth has been lost.

Charlie was proud of his boy; Charlie loved hats, too.

Most recalled Charlie and Bessie’s marriage as being a happy one, despite the fact that they were both very hard-headed people.

What was all the more surprising about the union was the fact that Charlie’s Bessie was a staunch churchgoer.

She was the type of woman who would not allow any foolishness in her household. She was a member of a holiness denomination that shunned alcohol and tobacco.

But Charlie liked a snort of the hard stuff every once in a while. While Bessie frowned on these vices, all she could do was pray. And pray she did.

My mother Marcella remembered at least one spat between her parents.

She was four or five at the time. Her daddy had come home late “likkered up” wearing a brand new black hat with a fine, crisp crease in the crown.

This was the Depression and money was tight. Bessie was fuming mad about the extravagant purchase. But something else got her hot under the collar.

Not only did Charlie waste money on the hat, but he woke up the children with his drunken antics. Charlie should have remembered that this was Saturday night and the family had to wake up early for church the next morning.

The family didn’t have electricity. Not many country people did back then. Folks used coal oil lamps.

Bessie stood in the kitchen clutching a housecoat to her breast with a kerosene lamp in the other hand. Her long, dark hair was tied back. She was trying to talk some sense into Charlie.

But Charlie would have none of it. He shook his head.

Charlie slipped the new hat off. He ran his finger along the brim and blew on the crown, as if he were cleaning off a speck of dust. Then he tossed his top dollar hat on the floor.

The black hat landed wrong side up—but right in the center of the cone of light emanating from the coal oil lamp in Bessie’s hand. The hat’s brim cast a long shadow on the foot-worn plank floor.

“I dare anyone in the state of Arkansas to spit in my hat,” Charlie challenged. He could be a braggart when he got drunk. He raised up his fists in mock defiance. “Then I’ll show them a thing or two.”

Bessie walked over to the hat. She sucked in her cheeks, rolled a glob of saliva in her mouth, and spat. The spit landed smack dab in the middle of the hat.

“That good enough for you?” she asked before she stomped off to bed.

Charlie’s family would always blame the flu for killing him. The sickness he caught in France scarred his lungs, some believed.

My great aunt Mae, Bessie’s younger sister, remembered the last time she saw Charlie. He was hitching a ride into town.

She remembered him standing on the back bumper of a rumble seat roadster and that he twisted around to wave at her as the roadster sped off.

“That was the last goodbye from poor Charlie,” she told me. “I would have never thought he would have been gone so soon after that.”

The winter of 1935, Charlie caught a cold. No one gave it a second thought until he took a turn for the worse.

Charlie Vincent died on 1 January 1936. Mom remembered it as being the worst New Year’s Day ever. His family said it was like he drowned in his own lungs. Bessie, always a believer in the mercy of God, knew that Charlie Vincent made peace with his Savior on his dying bed. And maybe he made peace with those boys he killed back in France. They wouldn’t haunt his dreams anymore.

“He was a deathbed Christian,” one of my holiness great aunts told me when I was younger. But there was no shame in my grandfather’s tardy conversion. “Even Jesus said the first would be last, and the last would be first. And Charlie is at peace among them.”

*I have four children: Thiago Matias (14); Sofia Arabella (12); Tobias Emanuel (7) and Thomas Samuel (3). They held the photos of their great granddad for this column.

Tom Darin Liskey spent nearly a decade working as a journalist in Venezuela, Argentina, and Brazil. He is a graduate of the University of Southern Mississippi. His fiction and non fiction have appeared in the Crime Factory, Driftwood Press, Mount Island, The Burnside Writers Collective, Sassafras Literary Magazine, and Biostories, among others. His photographs have been published in Hobo Camp Review, Roadside Fiction, Blue Hour Magazine, Synesthesia Literary Journal,and Midwestern Gothic. He lives in Texas where he tells his children that he has done worse things for less money.

More work by this artist: