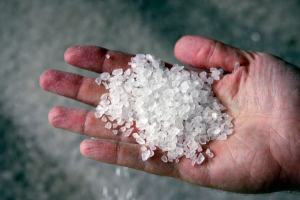 Life begins, as they say, with salt.

As a boy of 10 or 11, my distant aunts, uncles, and cousins from my father’s side of my quasi-rural Suffolk, Virginia, family would gather every Thanksgiving and Christmas over good natured gossip, uncounted glasses of liquor, and food. Insane amounts of food. All of it cooked by the proud southern women of the family who, if nothing else, were highly experienced in keeping their families well fed.

At home, our little family’s usual dinners were unceremonious but filling. If I arrived home from school to find an empty house, which was usually the case, an early dinner would consist of a cheese sandwich and a hefty amount of peanut butter, shuttled directly from jar to mouth with the largest spoon I could shove into my greedy face hole. This was fancy dining, let me tell you. Official dinners seemed to usually consist of leftovers from the night before – I rarely remember my mom actually cooking anything. Meals were reheated from dinners that somehow magically appeared earlier in the fridge. By the time dinner went ding in the microwave, one way or another, I was full and happy.

But the holiday smorgasbord was a completely different situation, one that required careful planning on my part to ensure the optimal harvest. The selection was enormous, spanning over a few card tables pushed together, and those paper party plates could hold only so much before things started to run together. The dish of olives and homemade bread-and-butter pickles was a strategic advantage, and the sliced Smithfield cured ham always conquered a large amount of my plate’s real estate. Other somewhat passable dishes were arranged in smaller mounds around the ham. The corn pudding and its slightly more sinister twin, tomato pudding, however, were pure radioactive sludge and avoided at all costs. The ladies patrolled the scene, making sure all the kids made the required trip to the pots of vegetables and greens. “Just try it at least,” they’d drawl sweetly, so we’d plop a runny little spoonful on the very edge of our plates, secretly hoping it would slide off close enough to the dog to be discreetly eliminated.

As much as I craved some of the dishes and disliked others, one thing was a constant force of attraction for me – the smells coming from the kitchen. A heady combination of butter, collards, smoked ham, and peppered butterbeans, which later made way for the sweet fragrance of coffee and pies. Whatever travesty a single dish committed in my eyes, it was forgiven in the mixed aroma. The kitchen in every one of my relatives’ homes was the hub of activity, the command center, the culinary war room, off limits to all but essential personnel. If you were one of the men, you’d never even bother entering. If you were a kid, you’d damned well better be quickly passing through to someplace else. But if you were one of the hardworking matriarchs, the kitchen was your meeting hall, your office, and your laboratory. And as drawn as my nose was to the scents, there was one thing I still remember with the fondest awe and reverence…

I never saw any of those ladies use recipes.

Pots were steaming with fresh vegetables, casserole dishes were leveled with lumpy potions poured from mixing bowls, pie crusts were filled with concoctions more complex than the store-bought canned apple filling. But I don’t remember ever seeing anyone use measuring cups, scales, or even those little spoons on a keyring. I once peeked from my vantage point by the back kitchen door and watched my nana make a batch of butterbeans. She’d unceremoniously dump the beans she shelled earlier that morning into a giant stew pot, fill it with water about a finger’s length above the beans, and drop in a ham hock. She’d then twist the top off the pepper shaker and scatter a perfectly intentioned amount into the pot. Then came the salt. More salt than I’d ever seen put into a single dish, except for that time my friends and I unscrewed the top of the school cafeteria salt shaker, only for Artis Johnston to become our prank’s unfortunate victim. No, this was literally salt poured from the box into her hand, studied for a microsecond, and dropped in with one swift motion. Then, as is customary with southern vegetable preparation, she boiled the living shit out of it.

The crazy thing was, it always worked. Every time. She never burned food, never under-cooked it, never over seasoned it. She just knew. Thinking about it now, I can only surmise that her natural expertise must have come from making those dishes a few hundred times throughout her life. Like the Beatles playing in Hamburg nearly every night for two years straight, she had performed the routines so many times, she didn’t have to think about the measurements of ingredients. She operated on pure instinct, as the recipe, such as it was, existed as a part of her.

Today, as an amateur home cook, or food enthusiast – I hate the almost juvenile triviality of the word foodie – my nana’s savant-like intuition for cooking draws me into a place of confidence in my kitchen. A place of jazz-like improvisation, of wild abandon but with intention. A place of experimentation and innovation without formality. A place in which carefully measured cups and teaspoons and grams don’t exist, but instead are replaced with fearless handfuls and pinches and dashes. A place of making great food by allowing myself to trust my intuition and go with my gut, modifying and tasting along the way.

A place that starts, as they say, with salt.

In addition to a twenty-year career as a web applications developer, Alan McCoy holds a BFA from East Carolina University and is the author of Left of the Dial, a screenplay about a campus radio station in the mid-80s. His next project, the culinary web series About a Handful, is coming soon. Alan lives in Raleigh, North Carolina.