It’s not an easy road — grief. You step and carry, carry and step. Somehow, you grab hold of it, claim it, and move with it like you are climbing a mountainous trail. Cheryl Strayed did just that in her journey (through the) and (being) Wild.

I traveled a physical one to see the best-selling author speak last Thursday, October 6th, several hours east of Atlanta to the Jabez Sanford Hardin Performing Arts Center at the Columbia County Library. In the suburbs of Augusta, Georgia, the traffic flow was tight and hurrying, carrying those seeking shelter from Hurricane Matthew. Stepping outside my car in the parking lot, it was the calm before the storm. The wind was still delicate, a gracious host for the evening. I met another there—a brave new connection and beautiful spirit carrying her own very recent loss.

We were in good company with an auditorium filled with fellow seekers and readers, those appreciative of how the written word can make the wide, wild world into a much smaller one with the beauty of shared experiences. That was the theme of the night and Strayed’s popular book. She said: 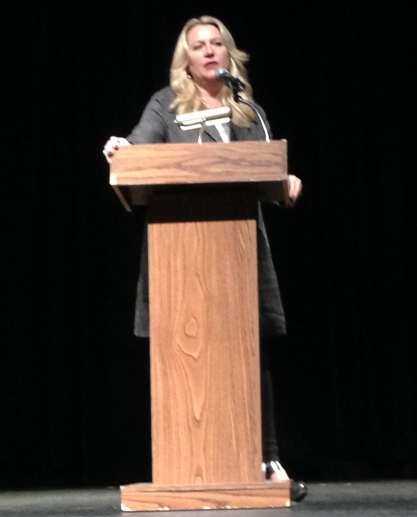 Speaking to a crowded room, one filled with souls blown through by personal challenges, loss and countless other experiences that we can say “me too” to, Cheryl Strayed told her personal story of how the book came to be, and her journey — with such grace, humor, and humility. She spoke of writing her book with rawness, dismissing decorum, and how our honest voices give birth to that deeper truth. Her personal struggles were laid bare in the text. She was open about sex, drugs, relationships, self-worth, and dealing with the loss of her mother, and how that loss was such a large impetus in her making the decision to hike the Pacific Crest Trail.

At one point, she shared a personal revelation:

In that moment, the collective energy in the room appeared to let out a sigh. She seemed to be offering us an allowing of our feelings, a sensitive weight-lifter, projecting to the audience in tandem with the light breeze that had ushered us into the auditorium.

I looked over to my companion and saw her rub the skin on her thumb, and then the fleshy part in the place between her thumb and index finger. It sparked a memory in me. Her small action reminded me of the time I rubbed the palm of my hand from grief. I had once, over a time span of several days, taken my right hand in my left, periodically, and held it tightly. I rubbed the palm of my hand in a circle hard with my left thumb and had created a blister, and then pressed more and circled through it — until a dear friend put his hand on mine, and looked me in the eye and showed me kindness. He gave me that look of “me too,” and I knew that I wasn’t sailing alone. I tried to give my new friend that look too, and I think she felt it. I hope so.

At the end of her talk, Strayed opened up a time for questions. First, the audience was shy. But she broke the ice with what she called the one question that was the “best and worst question” she had ever been asked. An older gentlemen sitting near the front row at one of her events once asked her, and I may be paraphrasing slightly here, “Have you ever taken money for sex?” Strayed answered, “No, but what are you doing later?” The audience burst into laughter, and then a stream of attendees slowly started to line up at the microphones on both aisles near the stage.

Strayed answered a wide variety of questions ranging from subjects like redemption, changing her name, and participating in SuperSoul Sunday. She even relayed a very cute, heartwarming story about the first time she met Oprah. Several audience members followed her theme of “me too,” speaking of similar experiences of loss, reflecting back a raw honesty to Cheryl Strayed that she had given, willingly, to us.

After the questions were over, she left the stage with loud, appreciative applause and stayed for a long line of readers and fans for the book signing. A reception/lounge area offered snacks and wine, which I think every library should have for their voracious readers. 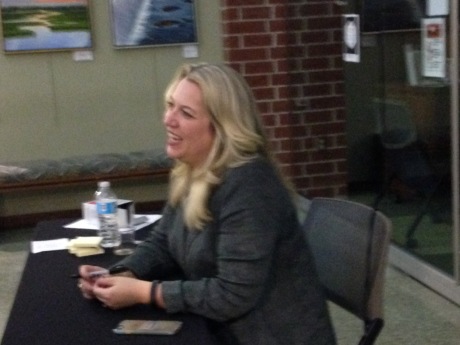 We bought a new copy of Wild, and Tiny, Beautiful Things, and she signed them graciously as she glanced at the long snake of a line behind us. It had been a beautiful, emotional, and tiring event. Through the seriousness and the laughter, the ultimate takeaway from the evening was hope. When asked just that question, she said:

“What gives me hope? The kindness of strangers, the power and beauty of the natural world…and those we love.”

Walking out of the building, we carried our grief and our hope. Step by step. The wind was getting stronger, pushing us and the other readers, the other seekers, ever-forward. With books in our hands and a full sense of “me too,” we got back on the road, and traveled on.

Thank you to Cheryl Strayed for a wonderful event. Write on.