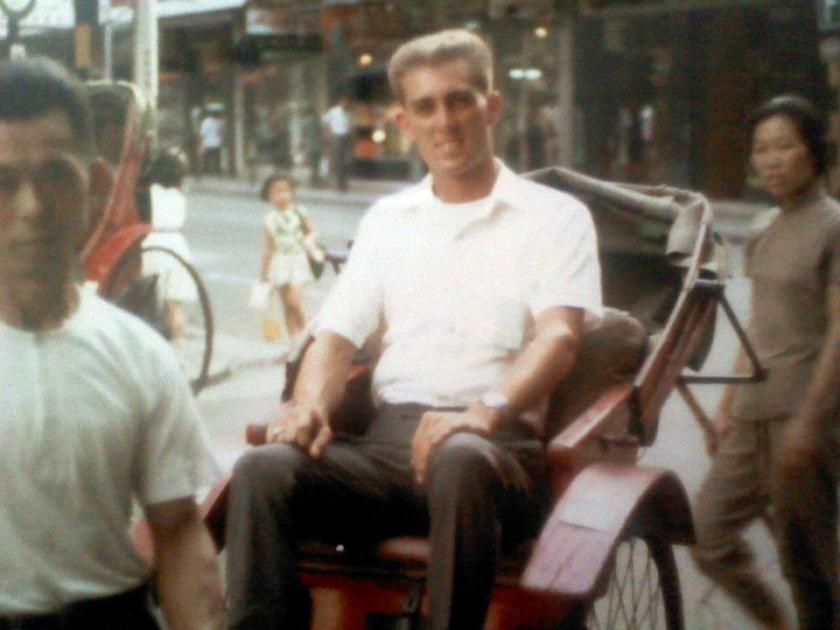 It’s odd, the bonds we create in life through random things to places we have never personally seen. I have never set foot on the soil of the Philippines, Hong Kong, or Taiwan, and if I am completely honest, I know little about those countries, the cultures, or the people. My perceptions are American white-washed views that have been fed to me by mainstream media and pop culture. So how is this a love letter?

Before I was born, my father was stationed in the Philippines when he was in the Air Force. This was immediately before things got really wound up in Vietnam. They were still able to travel quite a bit, and he took the opportunity, taking his camera with him. This is where I connect. This is where the bond happens.

As a child and then years later as an adult, and again with my children, my father would get out his slide projector, his large white slide screen, and illuminate the downstairs den with images of 1960’s Hong Kong Harbor. He told stories about how the runway jutted out into the ocean, suspended into the blue water and then just stopped. He said the runway was shorter than others and cutting edge but dangerous because the pilot had to have his speed calculated just right to be able to pull up in time before he ran out into the ocean, and that it would likely be his death.

He showed large illuminations of Tiger Balm Gardens and planted stories of how it was one of the first theme parks in Hong Kong, how large and elaborate the statues were, how the photos paled in comparison. He explained that trees were trimmed in various shapes, flowers strategically placed so that the colors led the eyes down pathways and to the bases of brightly colored dragons and tigers. He let the slide linger and the seed take root in our imagination; my own fictitious memory grew. There is a photo of my father sitting in a rickshaw outside the gate. He, as well as the other people in the photo, looks like a movie star.

He told us stories of the buses he and his buddies took into town. The sides were open, and they would run and jump on and off, a difficult feat returning to base after a night of drinking. He told about a plane coming from Vietnam and how there was a problem as it attempted to land for fuel, that the plane crashed, flipped, and caught on fire. He explained how everyone, American and Filipino, ran, tried to take water to put out the fire, tried to get inside, could hear the screams as the men hung upside down in their seats and burned alive. How they had to cut the straps to release the bodies when it was all over. How he knew about Vietnam before the American public did because he had to walk over the caskets in the cargo planes to get to the wing and crawl in to service the engines. This all taking place well before America knew anything of significance was happening. He recounted the time a friend chained a new motorcycle to a palm tree outside the barracks during a hurricane, and the tree fell over on the bike. How they played football. How they would fight over nothing when they got drunk, and laugh about it when they sobered up. He told me that was where he got his one and only tattoo, an India ink panther on his bicep that has faded into a fuzzy blur.

This is personal and not so personal. Ancient and archaic reminders from one man’s life long ago. It is irrelevant to today except that when I hear the names of these places on the news, I listen a little closer. I connect. Isn’t that what makes the difference: what makes us reach beyond our borders and realize we are all connected? This is what makes me see a human race, not divisions of it labeled and categorized by location, skin color, or creed. It provokes me to send you, half across the world, my love.

Pat Berryhill is a junior at Salem College in her home town of Winston-Salem, NC. She is seeking her bachelor’s in creative writing and English. She interns with the Winston-Salem Writers and the Bi Writers Association. She is also the Social Media Editor for Incunabula, Salem’s literary magazine.