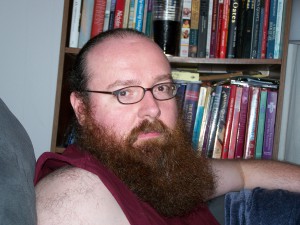 A Big Open-Hearted Bear of a Man: A Conversation with Rusty Barnes, Writer, Editor, Publisher

Rusty Barnes lives and works in Revere, MA, but grew up in rural northern Appalachia. He received his BA from Mans­field Uni­ver­sity of Penn­syl­va­nia and his MFA from Emer­son Col­lege. His fic­tion, poetry, and nonfiction have appeared in over two hun­dred  jour­nals and antholo­gies. After edit­ing fic­tion for the Bea­con Street Review (now Redi­vider) and Zoetrope All-Story Extra, he co-founded Night Train, a lit­er­ary jour­nal which was fea­tured in the Boston Globe, The New York Times, and on National Pub­lic Radio. He is a member of the National Book Critics Circle and manages Fried Chicken and Coffee, a blogazine of rural and Appalachian concerns. He is the author of two col­lec­tions of fic­tion, Break­ing it Down and Mostly Red­neck, and three books of poetry Red­neck Poems, Broke, and I Am Not Ariel. His latest book is the novel Reckoning, and he’s busy trying to write a crime novel.

C7: Rusty, not only are you an accomplished writer (two collections of fiction, three books of poetry, a novel: The Reckoning, another in the works) but you’re also well-known among your fellow writers as an editor and publisher. That’s how I’ve always known you, actually, writer, editor, publisher. How is that possible? How have you been able to sustain such a level of involvement? I’ve known of you since Night Train Five.

Rusty: Night Train V seems so long ago, Tony. Have we really known each other that long? It seems like there’s a Maltezos presence in my entire life. It’s possible because I don’t really do anything else. I have no outside job and no real hobbies except playing the guitar and listening to music. Pandora tells me I listened to 2038 songs last month, so that takes some time, mostly when I’m trying to sleep, ha. I have trouble sleeping. And when I sleep, I have some boss narrative nightmares. Anyway, my first job is taking care of the kids and homeschooling them, and the rest of my time is spent reading, writing, overseeing/editing NT with cofounder Rod Siino, and engaging in Facebook and Twitter. I’m late to the Twitter game, as I am often late or uninterested in jumping on trends. The main reason I can do everything I do, though, is that I have a breadwinning and patient wife who is also a publishing poet, among many other things she does well, and who handles my writing and editing career with aplomb. My kids are all writers in one form or another, too, so if there’s a deadline that needs to be met, I can usually count on forbearance from them for my preoccupations.

Rusty: My home life is great… great partner in life, great kids. Sometimes I feel like I’m the odd man out, though.

Rusty: Everyone else in the house seems settled and normal. I’m glad of that, but the share of ordinary didn’t come to me. I suppose I’m supposed to feel like the odd man out as a writer, but I have this fervent wish to not do whatever it is I’m doing. When I’m writing I think I should be teaching, when I’m teaching the kids I feel like I should be editing, and so on, and the end result is that I never feel comfortable in my own skin no matter what I’m doing.

C7: I bet that’s part of the reason why you can do what you do, Rusty. Good man, husband, father, teacher, tireless supporter of other people’s work. It’s incredible that you can keep two sites going at once, Fried Chicken and Coffee, and Night Train, considering all else that you have going on. Sounds like a man quite confident in his abilities, if you ask me. But you stay humble, Rusty. That’s probably the secret ingredient here. Which kinda leads me to this question: How do you deal with those passing moments we all have to suffer through, when you’re looking for a place to hide from all the pulling and tugging on your shirt sleeves, to gather yourself? I know for myself it’s a pretty much sure thing I’ll be useless one day of the week, or I’ll look back on a day and feel disappointed with myself because I just couldn’t get everything done.

Rusty: I tend to retreat at times like that, listening to music or rereading some favorite books, anything to get myself out of that deadly headspace. It’s a pretty sure bet, just as you said, that I’ll lose a day or two to depression or pure ennui, like oh God, can I really do this now? Can I sustain my efforts for one more go-round? Sometimes I can, sometimes I can’t.

C7: Speaking of headspace, how do you navigate between the genres of novel, short story, and poetry? I find that fascinating that you can work all three seemingly at once. It’s gotta be all or nothing for me. What skills would you say are easily transferrable from one to the other? Which aren’t?

Rusty: Usually I’m working on the novel regularly, every day, and poems come in short bursts of inspiration whenever they decide to come. I haven’t worked on short fiction in a long time. Maybe I’ve written three stories in the last three years. All that energy is going toward poems and novels now. Writing poems helps me remember the prose writing ought to at least be serviceable if not excellent, but not in the way of the narrative. I’d rather write good stories than pretty languaged things. Short stories have little to do with novels, I’ve discovered. I don’t know why people think they should write stories first. It’s some kind of workshop advice that’s calcified in place, I guess. They really have little to do with the practice of novel-writing.

Rusty: Yeah, that’s exactly it. In stories I want to tell the story, for lack of a more sophisticated way to put it, and in poetry, I want to reveal the moment in language that aspires to more than mere telling.

C7: Where’s the thrill on the sentence level for you? Describe it, that microcosm within that larger picture of simply telling a good story?

Rusty: On a sentence level, I get excited about things that fit together as a paragraph or complete thought, if that makes sense. The rhythm of each word, especially in longer sentences, means a lot to me. Ideally, though, a reader wouldn’t be able to tell why they liked a certain sentence. They’d simply know it was a good story that they were able to lose themselves in. My friend Maryanne Stahl described it once to me as invisible writing, and that’s more or less what I shoot for, language that reveals character or advances the story without calling attention to itself. Unless I’m writing a poem, then I want to try to say things beautifully, because what’s the point of poetry otherwise.

C7: Love that… invisible writing… without drawing attention to itself. That’s kinda like the ball and chain for most literary writers, don’t you think? It’s what defines the starving artist, that love of language and what it has to offer if we’ll only give it a closer read.

Rusty: I’m not starving, but then I married well.

C7: What’s it like living with your poet partner, Heather Sullivan, who, as a poet, understands language on that line by line level?

Rusty: Love of language pretty much sums it up. It’s great, most days. We don’t really talk craft around the house, though, except on Sundays and late at night when the kids are in bed. She knows how important writing is to me and now that she’s writing regularly again our relationship is better and better, maybe because we’re actively sharing that part of us that doesn’t really get out in day-to-day interaction.

C7: How have you helped each other’s writing? There has to have been some melding over the years, even if you don’t know it yet. But I suspect you do.

Rusty: She’s helped me tune my language, for sure, and helped me discover a poem doesn’t necessarily need to be publicly shown. She tells me what’s bad, in other words, or while not bad, something I write about that the public doesn’t need to know about me. I wouldn’t begin to presume about how I’ve helped her. I hope I help, that’s about it.

C7: It’s often personal, isn’t it? There’s a journey there, one we have to embark upon on our own–yes, but those people we love along the way, their peculiar chemical reaction to what we have to offer, if we’re open and honest about it, is what truly makes us the writers we become. Love that your children write. Mine write better than I did at their age. And it doesn’t bother me one bit.

Rusty: Mine write pretty well. I have to be careful I don’t overpraise sometimes. They’d love to hear it and I give it to them, hopefully when they deserve it, but I’m conscious of being your typical hyper-about-their-kids- parent.

C7: But you can’t ever help being an editor. You see what others don’t see.

Rusty: That’s true. I try to take off my editor hat when I read the kids. It’s counterproductive, I think. I want them to be sensitive to language as adults but not necessarily to be poets, you know?

C7: More the thought process behind the sentiments expressed? Checking up on them? Me too, I guess. Still, I find they’re more able to hold onto more complex concepts within their compositions than I ever could. Evolution, I suppose.

Rusty: I want them to be clear thinkers. And you can’t think clearly as regards writing unless you’re used to tangling with language to say something. That made little sense, sorry.

C7: It made perfect sense. I think we expect better than us.

Rusty: I just want them to be able to be clear.

C7: Better than us. One step above.

C7: Which means we’re always doing our best. As writers, thinkers, chroniclers. They make us better, gift us that raisin d’être.

Rusty: They make me more aware of myself, too. My youngest only began to read because of poetry. She just wasn’t interested until the family started doing these salons.

C7: So where’s your tempo taking you now, Rusty? What’s next? What’s on the agenda?

Rusty: I just finished this short crime novel and I think I’m writing a sequel. And I’m trying to find the agent I couldn’t find for my first book. And I have a short story collection that needs a couple more stories, and I have two poetry manuscripts that need a home. I’ll be busy this next year.

C7: It’s more than just the writing. There has to be a sense of purpose, as well, some indication that we’re headed somewhere worthwhile. And I’ve always gotten that sense from you, Rusty.

Rusty: I hope so. I hope we’re headed somewhere worthwhile. My purpose has high-toned meaning only in passing. I just try to get through the day for the kids and my wife, hoping that I’m good enough and strong enough to deal with what happens in the remainder of the day. I write because I’m really not good at anything else. No higher meaning.

C7: It’s no small feat being a writer, Rusty, ’cause you’re always writing for someone else. And so your every day struggles make it worthwhile, my friend, your good sense as a big open-hearted bear of a man.

C7: Thanks, buddy. Thanks for sharing.

Rusty: Sure thing. It’s been fun.