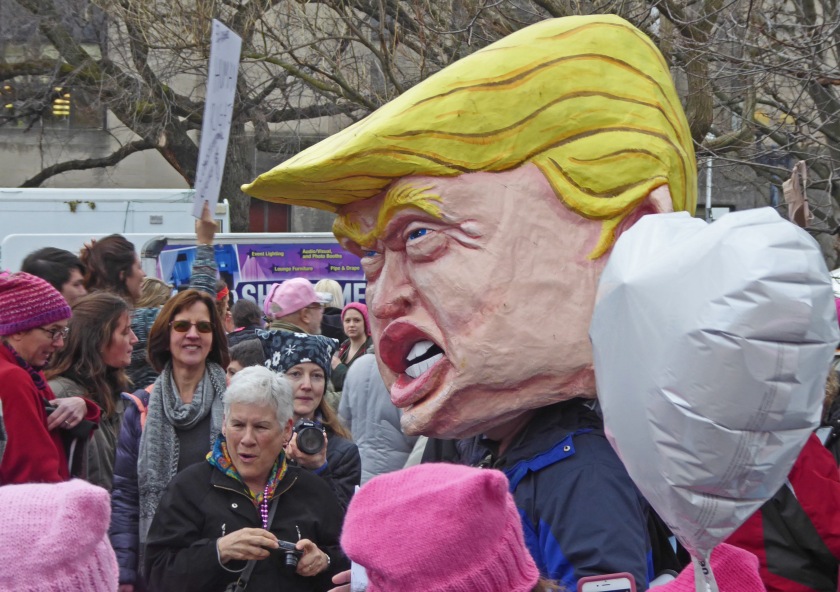 When a friend added me to the Nasty Women’s March group three days after the election, I knew I’d be going. Soon after, Nasty Women merged into the National Women’s March. At one time, rallying and marching in solidarity played a unifying, focusing role in my life. In recent years, after reaching retirement age, I’ve been picking up parts of myself I regretted leaving behind, like writing, like demonstrating.

During the Vietnam War, for seven years I marched and demonstrated to end the war. Doing so entailed certain risks. Once, while hippy chicks placed limp daisies in the bayonet barrels of the military police, I wandered far from the line of confrontation, and members of an Army battalion blindsided me by hoisting me in the air and heaving me down a long hill, a drop of fifteen to twenty feet.   I limped home and missed the mass arrests.

There was always a strong risk someone might lose control, throw a tear gas canister, or start a stampede. I’d seen people stampeded.  I’d seen people cornered at eight-foot-high wooden fences they couldn’t scale. My final anti-war, anti-Nixon demonstration occurred on August 8, 1974 in front of the White House. Nixon resigned rather than face impeachment.   Soon after, life told me to put my head down to focus on working, raising a family, and staying out of trouble.  I stopped writing.

I joined my first demonstration of the current era in October 2010.  I was traveling solo in France during the lead-up to a planned national strike. In the medieval village of Figeac, I first watched students and teachers together, sitting in the road, intermittently blocking traffic. The second day, I blended into a large gathering dominated by railroad workers.  I talked with people about why they were demonstrating, what they hoped to accomplish, how they planned to change to accomplish those things. Demonstrators freely shared bread, cheese and wine they’d brought for the “manifestation.” One cannabis advocate offered to share.

After I came home from France, I attended the raucous John Stewart/Steven Colbert rally on the National Mall in Washington. As crowds rushed for the Metro afterwards, I felt intimidated and instead walked 12 miles back to the suburbs.  On August 28, 2013, I walked in the 50th anniversary of the March on Washington with a friend who’d participated in the original 1963 event.  When he heartfully sang “We Shall Overcome,” a woman walking next to us broke down in prolonged sobs. However, when my friend saw the security backup on the Mall, he turned around and went home. I stayed in the black and white crowd.   For three hours, we waited to pass through metal detectors.   As the crowd periodically surged forward, I feared the crush might knock people over and cause a pileup. Instead, the crowd merely became more densely packed, with hardly room to breathe. People began expressing anger they’d miss seeing Oprah and Obama. A red-headed security woman crossed the line and began handing out bottled water.  Eventually, they waved us all through with wands.  That’s roughly when I started writing again. The release I needed to write went hand in hand with my return to demonstrating.

My participation in environmentally focused demonstrations began when my son and I went to the “Pope rally,” that is, the demonstration planned by the Moral Action on Climate (MAC) to coincide with Pope Francis’s meeting with Congress on September 24, 2015. A permit was obtained for 300,000 attendees.  Of the 15,000 who came, two-thirds were siphoned off by the Speaker of the House to provide an audience for Pope Francis’s address to the people from the portico.  After that, I took part in multiple environmentally focused demonstrations, some including street theater.  My crowd-averse wife came with me to a smaller one.  I briefly got involved in conversations to extend MAC and ensure the topic of climate change entered the presidential debates. The MAC conversations dissipated, the presidential debates ignored climate change, and I didn’t find a useful role to play in climate change activism.

So why go to the women’s march?  I’ve wanted to do something. I’ve needed to figure out how to fruitfully spend the years that remain.   My walking ability has devolved into an on-again, off-again proposition over the past two years. My wife and adult children didn’t want me going because they feared I’d fall or unwittingly walk into an outbreak of violence. The violence exhibited by inauguration demonstrators the day before the Women’s March exacerbated their fears, and seeing those protesters run from tear gas resurfaced my own. Still, I assured them the Women’s March would be peaceful. I went, in part, to show I could.

From a political and social perspective, I went because it’s all connected, and I strongly believe that, as Martin Luther King said, “Every man of humane convictions must decide on the protest that best suits his convictions, but we must all protest.” Protest can be private or public, shoulder-to-shoulder or virtual, and the forms it takes can morph as we age, but protest itself is essential, inescapable, and a moral responsibility. Protesting publicly and collectively fosters solidarity, makes connections, and influences decision makers. On May 9, 1970, at 5 a.m. Nixon snuck out of the White House without Secret Service escort to talk with demonstrators who came to Washington as part of the national student strike after the Kent State Massacre. He claimed he wouldn’t be influenced, but I’m convinced he was.

In anticipation of the Women’s March, a neighbor invited me to attend “intervention and active bystander training” with him. I jumped at the opportunity because I’d been concerned about what the March organizers were doing about marshals. We attended a training conducted by Swamp Revolt and learned we weren’t marshals exactly. Our job was to support anyone being verbally attacked, even a counter-protester being attacked by marchers. After training, participants said they felt they had a sacred role to play at the March. The woman with whom I was partnered for role plays said she recently had to run from police after they threw tear gas to disperse demonstrators. She and I acknowledged a mutual fear of the possibility of violence and the prospect of having to run away from tear gas.

Our neighborhood ran shuttles to the Metro on the morning of the March, starting at 5 a.m.  I knew many people who were going to the March, some solo, but I planned to go with the same neighbor who involved me with Swamp Revolt.  Still, I was concerned about my ability to keep up the pace.  We agreed to meet near the Metro in DC, but I walked too slowly and arrived too late.  So instead I marched solo, with a half million friends.

En route to the venue, at the corner by the Native American Museum, people lost direction in droves, walked down blockaded roads, and had to retreat. The human traffic reached an almost total standstill for over an hour. The crowd began surging. People started complaining about pushing. This surfaced memories of security back-ups at the 50th Anniversary March. Marchers asked each other whether we’d ever find our way.  We concluded, even if we didn’t, it was good being there together.  As we disentangled, we waved to old-time Los Angeles activist Angela Davis walking down the other side of the street. She waved and shouted back.

The march was for all ages, all races. And there were plenty of other men. Many wore pink pussy hats like the women, but at least one wore a classy blue pussy hat. The central issue was women’s reproductive rights. LGBTQ rights were strongly represented too, at least among those behind whom I marched. “Resist” was a pervasive theme; so was, “We reject fear and hate and embrace love.” Many posters commented on Trump’s connection to Putin. Because it’s all connected, scarcely an issue was left out of the signs and chants.  A strong Red Nation presence reminded us that “Water is life.”  Humor trumped anger. “Now you’ve pissed off grandpa,” “She’s such a nasty woman,” (showing Trump dancing with the Statue of Liberty), and “We shall overcomb” were among my favorites. I was most moved by a young demonstrator whose sign read, “This transboy stands with his sisters.”

The crowds occasionally broke into song, but merely walking together with others and observing their artful posters and varied hats sang to my soul. At moments, I found myself carried back to November 15, 1969, when the crowd swayed and sang along with Pete Seeger at the National Moratorium against the Vietnam War, “All we are asking is give peace a chance.”

The day after the Women’s March, I learned of many more friends who’d gone. I could have tagged along with any, but going it alone seems to be my way.  I also learned there’s soon to be a national march of scientists to combat the flat-earth mentality of the Trump administration. I’ve already heard from my son, who asked, “You want to go to this together?”

“You need to invite the Women’s March.  This is important,” he insisted.

“I’ll do it, but I think they’re already talking to each other,” I answered.

“It’s like the 60s are making a comeback,” he said, with welcome in his voice.

After retiring in early 2015 from a career in public health research, Jim Ross jumped back into creative pursuits after a long hiatus to resuscitate his long-neglected right brain. Since then, he’s published over 35 pieces of nonfiction and over 100 photos in over 40 journals, including 1966, Cactus Heart, Cargo Lit, Change Seven, Entropy, Friends Journal, Gravel, Lagan Online, Lunch Ticket, MAKE Literary Magazine, Meat For Tea, Panoplyzine, Palooka, Pif Magazine, Plum Creek Review, Riverbabble, and Sheepshead Review and Souvenir Lit.  Forthcoming includes: 2 Bridges, aaduna, Bombay Gin, and Thin Air. Jim hopes to move more in the direction of long-form reporting. He and his wife–parents of two nurses and grandparents of three toddlers–split their time across three states, MD, VA, and WV.