“When there is food on the table, when the candles are lit, when you wash the dishes together and put the child to bed together. That is order, that is spiritual order, there is no other.” ~ Leonard Cohen

Let me see the hands of all those whose first words to their future spouse were, “Would you marry me?” A small group, a group of one, myself. As unlikely as such a happenstance may seem, these were the words with which I first encountered Cheryl who was to become my blushing bride a mere two years later.

The qualifying factors were these: I was working in the bookstore, she came in. I had just separated from my wife and was, in part, damaged goods, unsure of myself, sad at the hopelessness I thought lay at the core of this tired old world, still torn inside from living part time apart from my toddler son, Toby, whom I loved with a love as fierce as the fires of perdition. Still, like those reprehensible red-coated hunters, I knew and could recognize a fox when I saw one. Cheryl was a fox. She was long-legged and dark and her resemblance to Diane Keaton did not hurt my interest in her, Diane Keaton holding one of those places in my pantheon reserved for goddesses or geniuses. And, when she approached the counter to purchase her books, I made sure I was the clerk who greeted her.

And, there in her stack of books, lying as innocently as a pit viper or incendiary device, was a copy of the poems of Leonard Cohen. Let me pause here to explain something. There is a line which runs straight from the wellsprings of creation through a series of songwriters and it goes roughly like this: from Hoagy Carmichael to Bob Dylan to Leonard Cohen to Elvis Costello. Leonard Cohen, like Dylan, is personal to me. He is mine the way my sense of humor is. He is part of the outside world that helps to define me. And, here was this beautiful woman (when she was closer I saw her hair was the color of dark chocolate and I thought if I could run my hands through it I could die happy) buying some of Cohen’s supernal poetry.

There was only one thing to do. I looked from the book to her radiant face, back to the book, back to her face, back to the book. I picked up the book. Words formed in my reptilian brain. And I spoke: “Leonard Cohen. Would you marry me?” She laughed. Thank God, she laughed. I laughed, too, as if I had made a joke but I had not.   I determined then and there that I had to know this woman. It was as important as knowing that Rob and Laura Petrie lived on Bonny Meadow Lane in New Rochelle. It was as important as Dylan and Leonard Cohen and Elvis Costello.

Once upon a time, there was an Irish author named James Joyce, who wrote a little masterpiece called Ulysses, a book which encompasses all life, a book which is universal and private, simultaneously. Its story takes place in a single day and the day James Joyce chose for the action of his masterpiece was June 16th, 1904, a day forever after called Bloomsday. He chose this day in honor of the date he had his first tryst with his wife-to-be, Nora. Would that I had a small percentage of his genius to so commemorate the date Cheryl and I first spoke. Would that I had the tongue.

So, that’s the story of our meeting, as true as it is fairy-tale-like. It is the story we will tell the children and their children. It is, in Hollywood vernacular, called “meeting cute.” But, it meant something deeper, obviously. Here eight years later I am still as gaga over my own little Diane Keaton, still in awe of her, still so damned tickled that she likes books like I like books, movies like I like movies.

The courtship process, which can be like a dance, which can be like a prizefight, was, for us, as spontaneous as light. It wasn’t long before we were co-habitating. (During this sitcom-like period we thought we were faking out our boss, taking two cars to work, saying goodbye to each other at the end of each workday like we were only co-workers. See ya, fellow employee. Have a nice weekend. The pressure bottled up inside us to act normally when our love was bubbling like a hellbroth could fuel future space shuttle flights.) And, it wasn’t long after that, that we were married in a simple, yet charmed performance on the stage of the Circuit Playhouse with a pot-luck reception following, where else?, at the bookstore.

We fit like two cogs. And the wheel we turn turned into a child only four years later. A child as true as a sprite, a child with an imagination as rich as Tolstoy’s, a child born of the fays, a child greater than the sum of her parts. Sweet Chloe, who is the answer to the question of my life, in a way, the answer to the question which began all this. It is said the true philosopher questions everything. I would say, that questions are the heart and soul of the universe, even unanswerable questions. Especially unanswerable questions.

But let’s back up a little and flip some pages (forgive the reading metaphors) to when I first met Cheryl’s family. I learned early on that Cheryl was from Mississippi, the heart of the delta, cotton country, the home of the blues, Walker Percy-land. I admit it added a mystique to her, as if anything needed to be added to the potion of hers that had charmed me.

We drove down to Indianola one bug-infested night, through the dark of the Mississippi Delta, a land as enchanted as Brigadoon or New Jerusalem, listening to Van Morrison on the tape player, my two-year old son, Toby, in the back seat, a small packet of joy. It is a night that sticks in my mind, a night when everything seemed possible. If Cheryl had said turn right here, we’re going to drive up this moonbeam, I would have followed her instructions without a second thought, without cynicism or doubt.

After seemingly endless deviations through seemingly endless fields of some crop or another, the black night swallowing everything except what our headlights illuminated, over roads which, as we got closer to Tara, got increasingly worse, we found ourselves in the center of the boondocks universe, a liminal place. I would not have been surprised if the final road had been made of cheese or something equally unfit to drive on.

Much was made then and later of my city boy wonder but the land I found myself in was as rich in magic as Oz or Narnia. The sky overhead had more stars than Memphis ever had—this didn’t seem fair—and when we made that final turn onto that final road (they insisted that this potholed path of dirt and weed was a road) our headlights picked up a bobcat which scooted quickly out of our sight and into the deep Mississippi darkness. He may as well have been a leprechaun, such was my delight. Cheryl laughed.

And the house we approached, the house we arrived at after our hours of night-driving, was as large as the Ponderosa, a house made of Paul Bunyan pine and mirage, lit up in that inky night like a castle in a dream. “We’re here,” Cheryl said.

“Yes,” I thought. “We’ve arrived in the Emerald City, right here in the middle of the cotton fields.” We pulled a sleepy two year old out of the back seat and went forward to be greeted by the Hodges clan, to be made as welcome as visiting heads of state, to be made as comfortable in just one quick evening, as if we had arrived at a second home. And, of course, we had.

I’ll gloss details here, though many still stick in my head from that memorable first visit—the long table where we gathered to eat like Robin Hood’s men in Sherwood, the video where Toby, feeling perhaps too comfortable, took charge in his two year old way, the walk through the cotton fields (it really was a magic land, an Eden, even factoring in the assault on one’s sinuses)—to make my real point. We were family immediately. No equivocation, no weird doubts, no guilt over stealing away their princess. We were family and were told as much that very first weekend.

And the fact that Toby was immediately made a grandson, elevated that quickly to so dear a status, is the sort of testament to the Hodges’ special brand of love that this is really about. They accepted my sweet-souled son readily into their brood, assimilated him, made him a Hodges. And, that Christmas, a mere three months later, there his moniker was on the list of children’s names.

Acceptance! Immediate, unquestioning acceptance. It fell upon us like good health, or snow on a poppy field. Everyone should be so blessed.

This is a unique family, a one of a kind family. When God gets us all together at the end of this he will ask for suggestions for when He starts over, what kind of animals we liked, what we didn’t (someone will point out, surely, that mosquitoes and poison ivy seem pointless), what should be the templates for re-beginning, making a world a little better than the last one. We must remember to tell Him how much we liked meerkats and acorns and The Beatles. And when he asks for a model for a family, if there is justice in Heaven, the Hodges will be that model, a family for whom loves comes as naturally as breath, a family with hearts as large as life and twice as guileless. Any other suggestion will be hooted down, the suggester told, as Big Max would say, “You don’t know big wood from brush.”

And let the story terminate here. Though it goes on and that’s its beauty, its wonder; it goes on as smoothly as Big Muddy, flowing still through more and more lives, adding some each year, and the love never thins like silly putty stretched one time too many. This family has much to give, much to teach. I, a willing and grateful pupil, still learn daily from Cheryl, from Toby and Chloe, from my whole clan, and I couldn’t be happier to find my children students in this life-school. But let it end as it began, with a question.

How did I get to be so lucky?

Corey Mesler has published in numerous anthologies and journals including Poetry, Gargoyle, Good Poems American Places, and Esquire/Narrative. He has published 8 novels, 4 short story collections, numerous chapbooks, and 4 full-length poetry collections. His new novel, Memphis Movie, is forthcoming from Soft Skull Press. He’s been nominated for many Pushcarts, and 2 of his poems were chosen for Garrison Keillor’s Writer’s Almanac. With his wife, he runs a bookstore in Memphis. 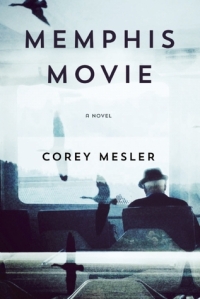